Niagara is a critical hub for trade between Canada and the United States, and as one of North America’s most important economic trade corridors, Niagara is perfectly positioned for companies accessing domestic and international markets.

The trade that flows across Niagara’s borders totals well over $100 billion and supports hundreds of thousands of jobs across Canada and the United States. The network of infrastructure that’s developed over time to support this important trade activity includes five international bridges, multiple railways, pipelines, and the Great Lakes-St. Lawrence Seaway System linking Niagara to the Atlantic Ocean.

As one of Canada’s designated Foreign Trade Zone Points, Niagara businesses are able to get personalized support to access the federal, provincial and regional programs for importing and exporting goods.

Niagara is a critical hub for trade between Canada and the United States. The economies of both countries are intrinsically linked by the flow of goods, services and people between the two countries. In 2018, $94 billion (CDN) in total freight value crossed both ways at the borders connecting Niagara, Canada and New York State.  In 2017, 78% of the St. Lawrence Seaway’s $10 billion in economic activity passed through Niagara via the Welland Canal.

Niagara was designated as Ontario’s first Foreign Trade Zone Point, speaking to the important role it plays both provincially and nationally in the county’s importing and exporting efforts.

Road. Rail. Sea. Sky. Niagara is home to a robust network of infrastructure that has been strategically developed over decades in response to the region’s growing role as a key North American international trade centre.

Thanks to a network of four major highways that connect directly to the US Interstate highways (QEW, 405, 406 and 420), approximately 1 million transport trucks and 5 million personal vehicles use Niagara’s five international borders each year.

Three railroads running through the region, the Class 1 CN and CP tracks and the short-line Trillium Railway, offer another affordable alternative for shipping products on land.

The Welland Canal connects Lake Ontario to Lake Erie and carries 78% of all freight that makes its way through the St. Lawrence Seaway, which connects the Atlantic Ocean to inland ports in Ontario, Quebec and the Midwest US.

In addition to the Niagara District Airport, which now offers daily passenger flights between Toronto and Niagara, five international airports in Toronto, Hamilton, Niagara Falls, NY and Buffalo, NY are just a short drive away.

As companies increasingly rely on the internet to transport big data and digital services across borders, fast broadband capability and wireless networks are another vital component in regional infrastructure.

Niagara is located on the same fibre optic pipeline that connects Canada’s largest Internet exchange, Toronto Internet Exchange (TorIX), with various major data centres in the United States and abroad. For businesses that specialize in the movement of data, this is a unique advantage that allows for a direct, fast, reliable connection to the North American data centre network. 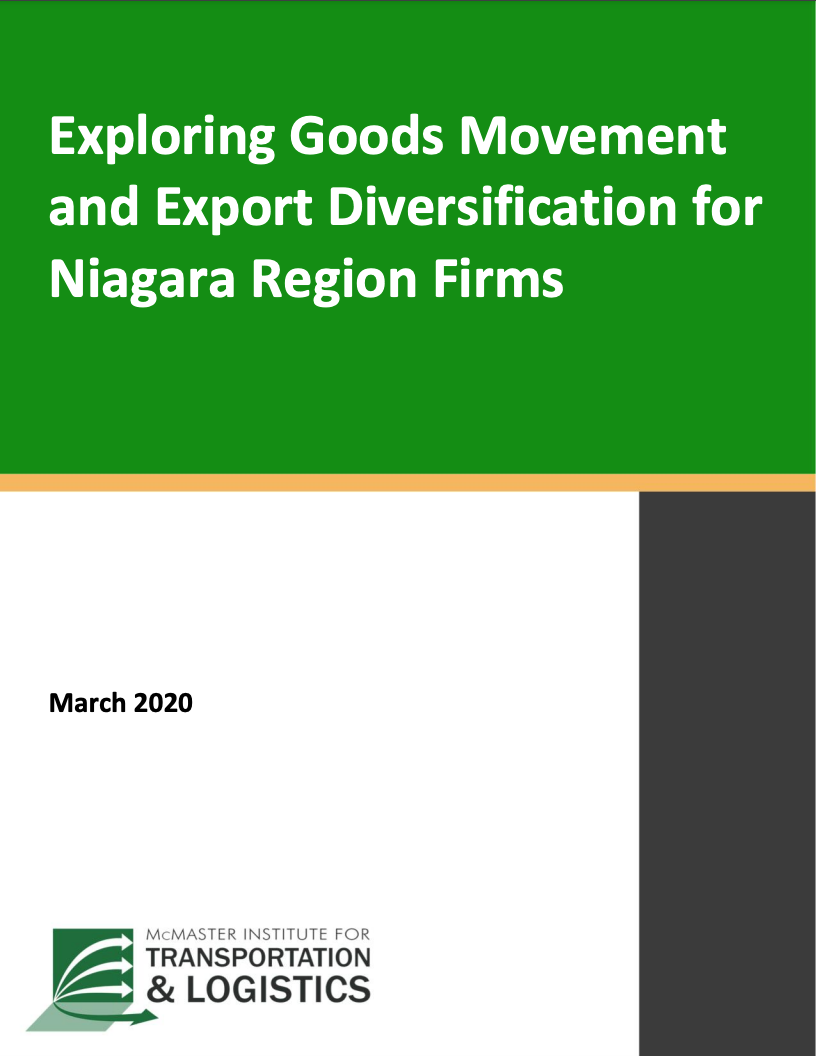 This report provides a detailed overview of the supply chain-oriented activities, domestically and internationally, for a sample of Niagara region firms from the manufacturing, wholesaling and agricultural/primary sectors.

in trade flows across Niagara's borders per year

crossings between the US and Canada go through Niagara’s borders

Canada is the place to invest and Niagara has the advantage