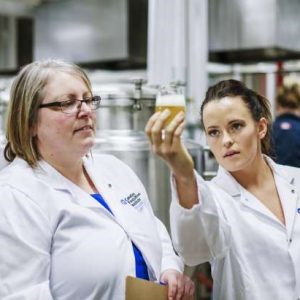 Rich support and resources available for agri-business in Niagara

In an Ontario apple orchard in the not-too-distant future, a robot arm mounted on an autonomous vehicle navigates rows of fruit-bearing trees at harvest, stopping frequently to reach up, gently twist the stem and pluck the ripest offerings at exactly the right time.

There are few human workers here, and nearly everything is automated. The robot places the apple on a conveyor belt that carries it to a bin where it can be sorted and either sent to market, to a major food processor, or sold at the farm gate.

“It’s probably three or four years away,” said Tania Humphrey, chief scientific officer at Vineland Research and Innovation Centre (Vineland), which is working to develop this and several other automated technologies for Canada’s horticulture industry.

“But at the same time, it’s a competitive space. People are pretty motivated to get it done and get something out there, so it should be able to happen fairly quickly.”

This may seem like a space-age scenario, but this kind of automation is said to be exactly where Canadian horticulture is going, and the Niagara region has become an innovation hub for growing technologies that was the stuff of science fiction even five years ago.

“We’re at a really interesting point in time now, where the technology is starting to become a lot more capable, a lot more affordable,” said Humphrey, originally a plant biologist and now head of a team of 15 research scientists among nearly 100 employees at Vineland.

“So it’s actually finally feasible to start to automate some of these processes, and we’re in the space for those reasons.”

FOODS OF THE FUTURE

Vineland is an independent not-for-profit organization with a mandate to find commercial applications for scientific research — and it’s just one of several Niagara institutions that contribute to Niagara’s strong capacity in agri-business innovation.

Niagara has been an agri-business powerhouse for decades, developing industry-leading agriculture technology and developing “foods of the future” that are tailored to Canadian growing conditions and supplying markets around the world.

Vineland has developed more than 20 new plant varieties, including greenhouse tomatoes tailored to Canadian operations and a cold-climate variety of sweet potatoes that launched this year.

“We really do take an outward-facing, industry-based approach, where everything we do — we need to see endpoint commercial impact in the sector,” said Humphrey.

“It’s how we measure our success.”

Niagara is also home to a highly-skilled workforce, thanks in large part to internationally-recognized programs at Brock University and Niagara College.

Both are major economic catalysts for economic success in Niagara, and also contribute to Canada’s agri-business strengths.

Niagara College is home to the Canadian Food and Wine Institute Innovation Centre, which is dedicated to helping companies — particularly small and medium-sized enterprises — commercialize new food and beverage products and bring them to market.

A major success story is the college’s collaboration with Reinhart Foods — perhaps best known for its Allen’s apple juice brand — to develop a light red alcoholic cider that is sold in LCBO stores across the province.

“Our job is to come in and act as the innovation enabler,” said Lyndon Ashton, manager of the innovation centre. “We help companies accelerate what they want to do and bring those products to market.”

About two-thirds of Niagara College alumni live in the Niagara region, meaning that specialized talent stays in the area.

“When you come and work with us, not only are you gaining access to funding through different government programs and tapping into highly qualified personnel who assist you with overcoming some of your commercialization or innovation challenges,” said Ashton.

“You’re also tapping into the next generation of workforce that is in high demand, and in short supply.”

Brock’s world-renowned Cool Climate Oenology and Viticulture Institute (CCOVI) has been a major player in developing Canada’s wine and grape industry, which contributes an estimated $9 billion to the national economy each year.

Niagara accounts for 84 per cent of Ontario vineyards and 50 per cent of Canada’s vineyards, which makes it a central hub for industry research and development.

“We take our research priorities directly from the industry,” said Debbie Inglis, a biochemist and director of the CCOVI.

“We then, as an organization, take those research priorities and develop research programs around those priorities to resolve the issues of the industry.”

CCOVI’s economic impact from research outputs in Ontario has been assessed at $91 million annually.

One area of expansion for CCOVI is in wine consumer behaviour. Brock is in the process of creating the world’s first augmented reality, virtual reality and sensory reality wine consumer laboratory, which will be used to create a variety of environments in which people purchase and consume wines. Researchers will study how a range of factors such as sights, sounds and smells impact choice and impression of wine.

Thanks to these partnerships and others, Ontario’s Niagara region has become the ideal destination for agri-business companies looking to relocate or expand their operations, where they can tap into the area’s resources for innovation, commercialization and R&D support.