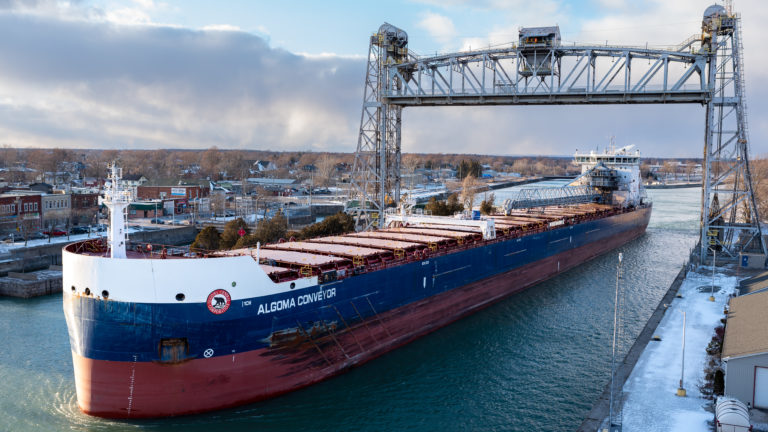 For Oliver Hiltebrand, the expansive “Lakers” and “salties” sailing through the Welland Canal are more than just a majestic sight to behold — they represent a business opportunity.

In 1989, his family founded Walter Hiltebrand Marine Services, a ship engine repair business in the Niagara region.  Walter and Oliver, a father-son duo, run the business with a handful of other local residents and rely on Great Lakes shipping in the region to support the supply and demand of the services they offer.

“We are part of the local support industry that keeps the vessels moving, offering cost effective / locally based solutions,” shares Oliver Hiltebrand, Vice President of Walter Hiltebrand Marine Services Ltd., “We are making constant investments in our business, in excess of $100,000 per year to improve our workshop capabilities. Investments are generally new workshop machines, specialty tools and anything to help us be more efficient.”

Great Lakes marine shipping has a ripple effect that deeply impacts Canadian communities – and the Niagara region is no exception. The Niagara region, nestled between Lake Ontario and Lake Erie, relies on shipping to support economic growth by not only exporting and importing goods but also fostering an environment for marine industry-related businesses to thrive with plenty of room for growth. That opportunity is behind a recent drive by city mayors and members of the Chamber of Marine Commerce to work with the province to develop an Ontario Marine Strategy.

A critical element of Great Lakes shipping in the Niagara region is the Welland Canal, which is the only channel that connects Lake Ontario to Lake Erie, through a system of eight locks. The St. Lawrence Seaway Management Corporation (SLSMC), which manages the canal, estimates that ships carry 9 million tonnes of cargo per year through just the Welland portion. More than 500,000 tonnes of local grain exports, organic sugar, fertilizers, construction materials, steel, machinery, road salt, coke, iron ore, containers and other products originate from/or are destined for the Niagara region.

“The Seaway helps local businesses and farmers to be successful by offering them a direct, reliable and competitive transportation route to ship their products (in North America and around the world) and or receive goods and services from their suppliers to support their operations,” says Nicolas Poirier-Quesnel, Manager, Government and Community Relations, SLSMC.

In addition to these economic benefits,  the Seaway has also invested more than $1 billion in the infrastructures of the Welland Canal since 1998. These recurrent investments have helped create thousands of local jobs and supported local businesses.

The marine traffic via the Welland Canal has led to clusters of marine service and suppliers to develop and thrive in towns and cities all along the transportation corridor.

Mayor Bill Steele of the City of Port Colborne explains, “Local businesses benefit from both repair and supply business to the ships and industry. When ships are loaded or unloaded in Port Colborne that also means people are employed. Grain and other agricultural product terminals also operate in the city, either loading, unloading, or storing product.”

He adds: “Great Lakes shipping is an important business driver for the City of Port Colborne’s economy, and we are looking to continue to grow and expand this business.”

“It is a good feeling to know that Heddle Shipyards can create hundreds of jobs for our community and be an avenue for them to support their families,” says Ted Kirkpatrick, Director of Business Development and Government Relations at Heddle Shipyards (Port Weller).

The Chamber of Marine Commerce and other marine stakeholders are working to demonstrate the perks of joining the marine sector through the Canadian Marine Industry Foundation’s Imagine Marine initiative, and to create a direct path of training for those looking to join the workforce.

“The need for employees is drastically increasing,” shares Kirkpatrick.  “Heddle has recently partnered with Niagara College on a Shipbuilding and Ship Repair Program. This is going to be a micro-credential program that focuses specifically on the skills and trades required to work at Heddle Shipyards in shipbuilding and ship repair.”

Opportunities for economic growth in the Niagara region

The Seaway has the capacity to handle at least 50% more cargo shipments and is working on attracting new business while supporting the existing ones in the region, says Poirier-Quesnel, Manager, Government and Community Relations, SLSMC. “The Seaway has a dedicated team of real estate and logistics experts who are responsible for business development. Using in-depth market research and strong industry relationships, we’re able to connect our tenants with local and international partners that help them reach new markets, while expanding their customer base and creating economic growth for the Niagara Region.” He adds that the SLSMC’s focus on the global demand of maritime transportation within the entire Great Lakes and St. Lawrence region ensures the Seaway is well positioned to help expand Niagara region’s business opportunities and strategies in North American markets and the world.

“There is great opportunity to leverage Niagara’s maritime connections to support prosperity in the region,” says Ian Hamilton, President & CEO of HOPA Ports. HOPA is partnering with Bioveld Canada to redevelop a large former brownfield site along the Welland Canal in Thorold, called the Thorold Multimodal Hub. The 200-plus acre site is now home to a dozen tenant companies. “It is the multimodal transportation infrastructure that makes this space so attractive to a wide range of modern industrial users.”

Bruce Graham, Vice President of Ontario and Atlantic, QSL. which offers port-terminal operations, marine logistics and transportation services in both Port Colborne and Port Weller, says: “As the world is facing important supply chain disruptions arising from multiple contexts (pandemic, geopolitical crisis, employee shortage, increased extreme environmental events and climate urgency) more than ever before, a maritime strategy would enable the needed investment in technology to optimize the logistic chain and reduce our carbon footprint.”

Compared to other modes of transportation like trains and trucks, marine shipping already takes the lead as the most environmentally friendly mode — emitting the least amount of carbon into the environment per tonne/kilometre.

But as the Canadian marine shipping industry continues to work towards the goal of achieving net-zero carbon emissions by the year 2050, an Ontario Marine Strategy could help local businesses achieve these goals in a more timely manner.

“We need a Made in Canada and a Made in Ontario solution so that shipowners can continue to make strides in reducing our environmental impact”, says Hannah Bowlby, Assistant Manager of Communications for St. Catharines-based Algoma Central Corporation, which operates the largest Canadian fleet on the Great Lakes and employs over 260 people in the Niagara area. “By providing the marine industry with support for projects and research initiatives, we can implement the right solutions and technology that help reduce or eliminate greenhouse gas emissions.”

Heddle’s Kirkpatrick would also like to see a made in Ontario policy for provincially owned and funded vessels as well as tax or other financial mechanisms that allow Ontario shipyards to remain competitive with counterparts in other provinces.

Provisions in an Ontario Marine Strategy could also be directed towards alleviating the labour shortage crisis.

“Sustainable development of maritime transport depends on the availability of qualified workers”, explains Bowlby. “Financial support for career advancement/development, and more awareness of marine industry opportunities in trade focused high schools would be crucial components of an Ontario Marine Strategy.”

Kevin Reles, Terminal Manager at Ceres Global Ag. Corp., a grain terminal in the Niagara region, adds, “We need to ensure that the system stays healthy with an environment that allows for the growth of the carriers that service it. Availability of the vessels that can usher our products to market is paramount to the success of that system. Attracting and nurturing more business that are users to this system is of benefit to all of us as then the vessels that travel this system will have more availability to haul product back to its next load or unload. Profitability for our carriers and lower throughput cost will allow our service providers to invest in their fleets allowing for specialization and modernization.”

The original publication of this article was with Chamber of Marine Commerce on August 8, 2022 and can be viewed here.