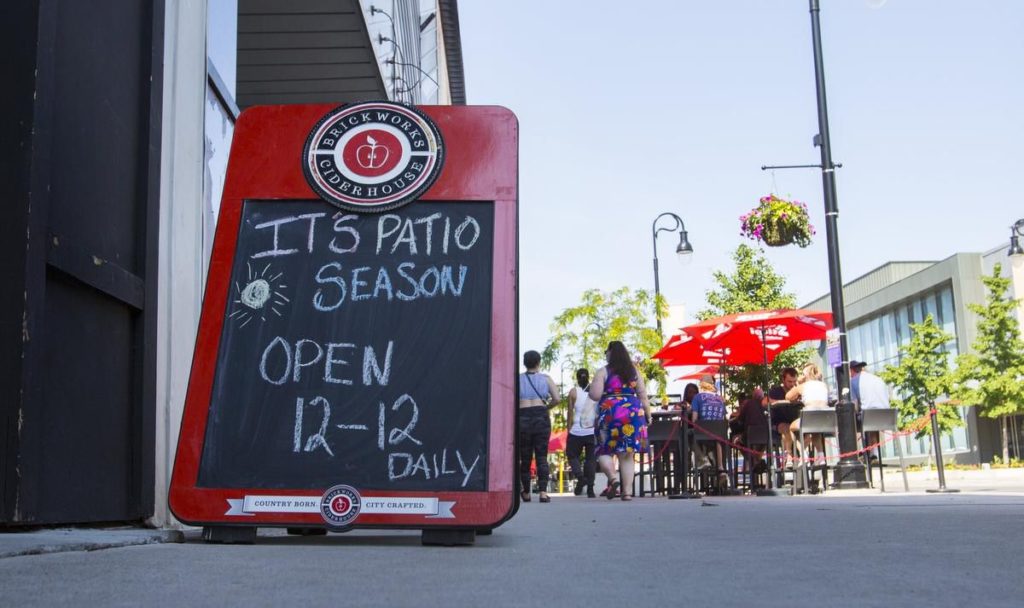 Friends are allowed to gather on Niagara patios again — in limited numbers, of course.

Niagara’s acting medical officer of health lifted a household-only dining restriction for tables of four Thursday as the region’s numbers of COVID-19 cases and other targets continued moving in the right direction.

The move came at the same time the province announced it would enter Step 2 of its reopening plan on June 30, earlier than the targeted July 2 date.

But Dr. Mustafa Hirji cautioned as restrictions start to be lifted, people shouldn’t let their guard down against the virus, which is continuing to spread in the region mostly through social gatherings.

Ontario communities such as Waterloo and Timmins saw some of their progress take a step backwards recently with increases in cases due to the highly contagious Delta variant. Waterloo announced Thursday it will delay moving into Step 2 with the rest of the province.

“As we start to lift, there’s going to be more opportunity for infection to spread. What we need to be doing right now is being careful and slow about that reopening,” Hirji said.

“That buys us time to keep vaccinating, so that by the time the Delta variant is able to become a big proportion of our cases, we’ll hopefully have a big majority of our population vaccinated with two doses.”

Hirji said the big risk Niagara faces right now is if it reopens too quickly and lets the Delta variant take off, it will end up like Waterloo or see a pattern like in the United Kingdom where, in spite of vaccinations, they are seeing cases go up rapidly.

There were six new cases of COVID-19 reported in Niagara on Thursday and 188 active cases in the region.

At least 426 people with the virus have died.

The region has 65.2 per cent of residents with a first dose of vaccine and 20.3 per cent with full vaccinations.

Hirji’s Section 22 order under the Health Protection and Promotion Act required people eating outdoors at the same table to be from the same household. That was lifted Thursday, effective immediately, as infections dropped for a few days below the threshold he set.

Hirji previously said the cases of virus would need to fall below 15 per 100,000 residents before he would lift the order. That number was 11.9 on Thursday.

Restaurants, bars and other establishments will still have to follow other restrictions in Hirji’s Section 22 order for now, which require them to ask diners if they have any symptoms of illness and record names and other information in case contact tracing has to be done later.

Under the province’s Step 1 regulations, in place until June 30, only four people can eat at the same table. The exemption to that rule is if there are more than four people from the same household or if one of the people lives alone. A caregiver for any member of the household can also sit at the table.

Step 2 starting on June 30 will allow outdoor dining to have six people per table.

Hirji, speaking Wednesday before the province’s announcement, said the province isn’t ready to be moving into Step 2.

He said it hasn’t been two weeks since the province reopened in Step 1 on June 11 and there needs to be two weeks to really see the impact of those reopenings and what the trend has been.

The province put out its framework with three-week intervals, and Hirji said that’s the bare minimum required.

“I don’t think the province can safely decide to move to the next step because we haven’t yet had two weeks to even know what kind of impact we’ve seen from the reopening,” he said Wednesday.

“I think we really do need to wait those full three weeks to know what’s going to happen and I think it would be a mistake to move ahead with the reopening earlier than that.”